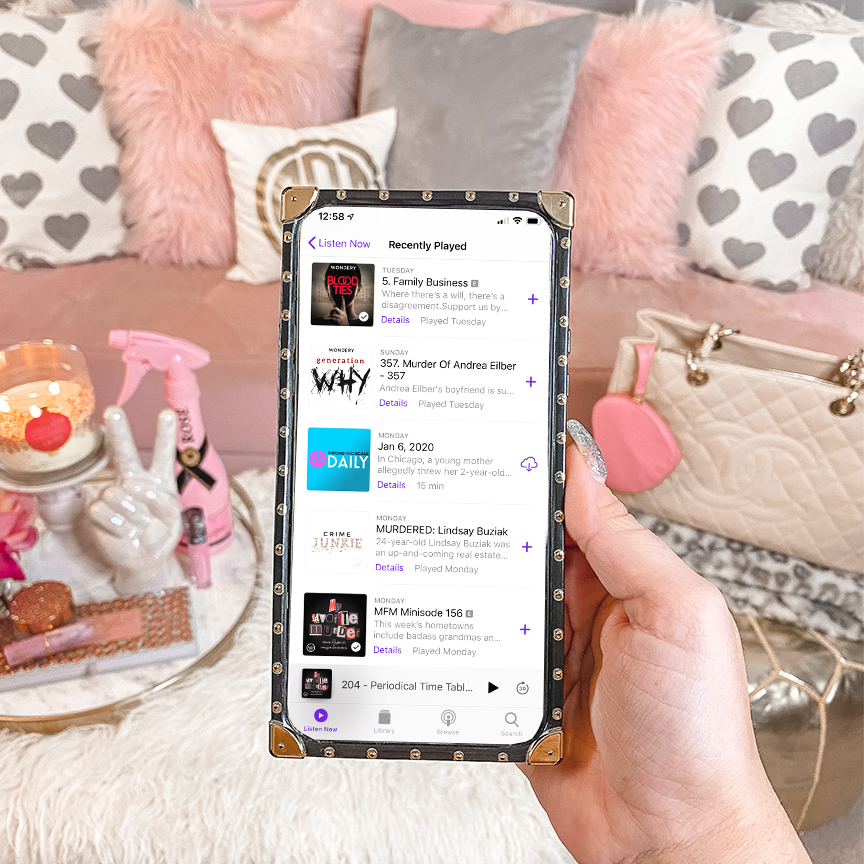 Hello, fellow true crime lovers! Welp… true crime podcast lovers, that is 😉 I am back with yet another podcast round-up. I have had this particular post sitting as a draft for months and I’ve continued to add new favorites, but it is easily long enough now y’all! If you’ve been reading here a while, you’ll know that I am an avid podcast fan and listen so often that this particular round-up isn’t my first rodeo. Be sure to start with THIS LIST and then head back over here for the rest! Now… in no particular order, these are my most binge-worthy crime podcasts.

CRIME JUNKIE: Narrated by one of the Central Indiana Crime Stoppers board of directors, Ashley Flowers knows her stuff! This weekly podcast has a similar layout to my personal favorite, Sword & Scale. Every episode covers a murder or disappearance that Ashley and her co-host/producer Brit are riveted by. The dialogue between the two reminds me how my friends and I chat about various high-profile crimes. But instead of sharing the most gory, gruesome details, I’d say that Crime Junkie is the PG-13 version to the rated R Sword & Scale. When I chat with really anyone about their fav. true crime podcasts, this is always what they say is their favorite.

RADIO RENTAL: This unique podcast has quickly become my most-anticipated weekly listen. First and foremost, its hosted by Dwight from The Office. He plays the spooky character of Terry Carnation, a video store clerk who keys up people’s real-life horror stories. The stories shared are anything from brushes with famous serial killers to ghosts to near death experiences. IT. IS. FASCINATING!

GENERATION WHY: Honestly, GenWhy could be best wrapped up as Crime Junkie but with dudes. Another weekly podcast that covers a new crime each episode, I consider this the B squad to Crime Junkie A squad. But, the hosts’ voices are so soothing that it’s the perfect bedtime story to listen to… if you don’t mind falling asleep to murder mysteries.

CULPABLE: Thanks to Kelsie of Sassy Southern Blonde, I was so sucked into Culpable. This is an investigative podcast by the same folks who brought you Up & Vanished. According to the Culpable Podcast website, “On February 26, 2014, Christian Andreacchio was found dead in the upstairs bathroom of his apartment from a single gunshot wound to the head. After a mere 45-minute investigation, local police ruled his death a suicide, despite substantial evidence that points to Christian’s death not only being a homicide, but premeditated murder.” Host Dennis Cooper heads to Mississippi to talk to the family, Christian’s closest friends, and everyone associated with the potential murder, but things just don’t line up. What did the police miss and why? And will the real killer be brought to justice?

BEAR BROOKE: In 1985, a hunter discovered a 55-gallon barrel in Bear Brook State Park in New Hampshire. He horrifically discovered that inside were the remains of an adult female and a young girl. For years, the bodies went unidentified. Then in 2000, another barrel was discovered and in it, two more young female bodies. This investigative podcast reopens this decades-long grisly cold case and helps hunt down a serial killer.

BLOOD TIES: Another completely unique podcast, Blood Ties is an audio drama in which actors from Frozen, Community, and more voice this six-part scripted series. This thriller follows Eleanor Richland, daughter of a world-renowned cardiologist. When his plane crashes in the Caribbean killing both of Eleanor’s parents, she finds out dark family secrets she might not be able to keep to herself. There is one episode left and I’m on the edge of my seat!

22 HOURS: AN AMERICAN NIGHTMARE: This podcast was suggested to me by my best friend who lives around the corner from where this crime took place. In 2015, a man was driving through an upscale D.C. neighborhood when he noticed a home on fire. The terror that first responders found inside the home would come to be known infamously as the D.C. mansion murders.

MY FAVORITE MURDER: I can’t believe it took me SO long to get into this podcast. It’s easily one of the most popular of the genre – not to mention that my app constantly suggests it – but honestly something about a true crime comedy podcast just didn’t initially appeal to me. But I have to say, Karen and Georgia really grew on me. Every Thursday, these two comedians get together and chat about true crime, current events, and everything in between. The first half of the hour-long show is laugh-out-loud hilarious chatter between the two women. Then each take turns sharing a murder, sprinkling in comedy throughout the gruesome details. A bonus to this show is that once a week, MFM releases a mini episode in which Karen and Georgia read listener-submitted hometown murders!

Let me know in the comments if I left any of your favorite true crime podcasts off the list! I am always looking for a new one to binge.